MILAN (Reuters) – Italy’s tax police seized and destroyed 9.5 tonnes of pork from China which was banned by the Health Ministry after African swine fever broke out in the Asian country, police in the northeastern city of Padoa said on Wednesday. 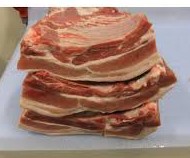 The illegally-imported pig meat was hidden under a shipment of vegetables from China in a storage facility near Padoa managed by a Chinese citizen.

The load of pork was destroyed and the man was charged with smuggling, trade in harmful foodstuffs and spreading of animal diseases, police added.