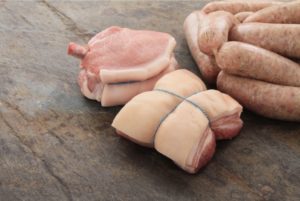 For a guy in the food industry, David Yeung talks a lot about how gross food can be. Specifically, pork, the most popular meat in China. Industrial hogs are bred in harsh conditions—packed together in pens, sometimes eating contaminated garbage—and the 41-year-old Hong Kong businessman and restaurateur was not surprised by the massive pig die-offs triggered last year by the swine fever epidemic.

“The pig is also a huge source of carbon emissions and water pollution,” he says on a recent morning, sitting in a pink chair in one of his restaurants, Kind Kitchen. “The unsustainable manufacturing, the exponential growth, the hormone injections, the cramming into unlivable environments,” he says.

Obsessed with climate change, Yeung spends much of his time organizing events, delivering speeches, and making media appearances across Asia. It can sometimes seem as if he’s on the campaign trail, and in a sense, he is: He’s running on a platform of eating fewer pigs, and he wants people in China to vote with the $118 billion spent each year in the planet’s biggest pork market.

Yeung is a pioneer of a new kind of protein, a plant-based product called Omnipork that tastes like pork. “We’re looking at a collective survival issue of the planet,” Yeung says. “Pork today becomes a very urgent issue.”