Total GB pig meat sales fell by 4.5% in volume, compared to the year before, in the 12 weeks to December 29, which includes the key Christmas period. Total spend remained stable though, as average prices were up 4.5%.

Primary fresh/frozen pork recorded particularly significant losses in both volumes (-8%) and value (-7%). Losses were driven by roasting joints and chops/steaks. 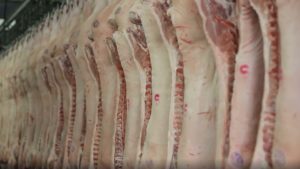 Bacon sales continued to slide (vol -6%), though prices have recorded a strong 8% rise, which supported spend. There has been some growth in bacon from premium and healthy ranges while the standard tier has suffered.

Among other red meats, total lamb sales slipped by 4% in volume compared to the same period last year; prices were 2% higher. Total beef sales were quite stable in volume terms, falling by less than 1% year-on-year.