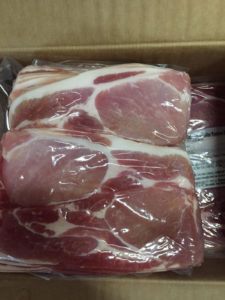 The Co-op is to reduce the amount of nitrites used in its own-label British bacon range by 60%, in what it described as a first for major UK retailers.

Nitrites, a type of preservative used to cure bacon, will be reduced by this level across 24 fresh, British Co-op lines – and in all its ranges, including its premium tier. This includes back and streaky bacon, medallions and bacon chops as well as lardons.

The retailer said this would come at no additional cost to consumers. The reduced nitrite bacon will be launched in stores with 11 core lines this month, followed by 13 premium lines later the year.

The move is a response to consumer concerns over the link, set out in a World Health Organisation-sponsored study in 2015, between the consumption of nitrite-cured processed meats and cancer, particularly bowel cancer.

The Co-op explained that without the use of nitrites to cure bacon, it would simply be classified as salty pork. Nitrites are required for preservation and to produce the typical characteristics of flavour, taste and colour of bacon, it said.

Breige Donaghy, director of delicious food at Co-op, said: “As a responsible retailer, we look for ways to make real change to help our members and customers to make even better choices when shopping in our stores.