In December, UK imports of fresh and frozen beef continued to record declines compared to the previous year. However, this drop was considerably smaller than seen over most of this year. Exports also recorded a decline, a contrast to the trend seen throughout most of this year. Nevertheless, UK beef exports in 2019 recorded extremely strong year-on-year growth.

Throughout most of 2019, the UK beef export market recorded considerable gains compared to the previous year. However, the latest data for December 2019 bucks this trend. UK exports of fresh and frozen beef totalled 9,550 tonnes in December, marginally less (-1%) than in the previous year. 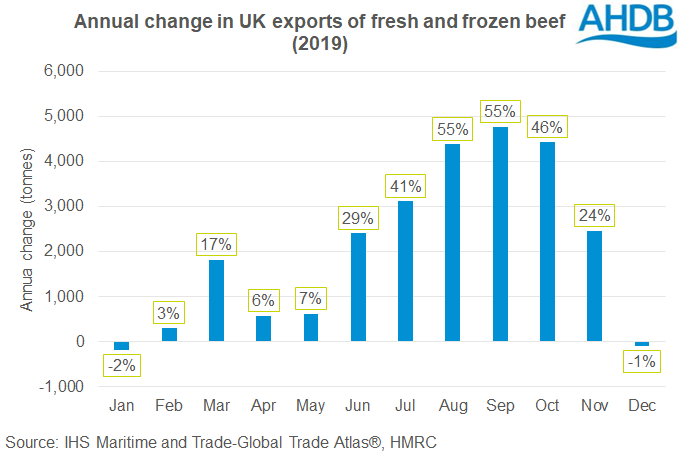 Nevertheless, UK exports in 2019 as a whole recorded strong growth compared to the previous year. Shipments of fresh and frozen beef increased by 22% (24,700 tonnes) on the year, totalling 135,200 tonnes, the second highest on record. Meanwhile, the value also recorded an increase compared to the previous year, although this was not to the same degree. This was due to a 37p/kg reduction in the average export price. 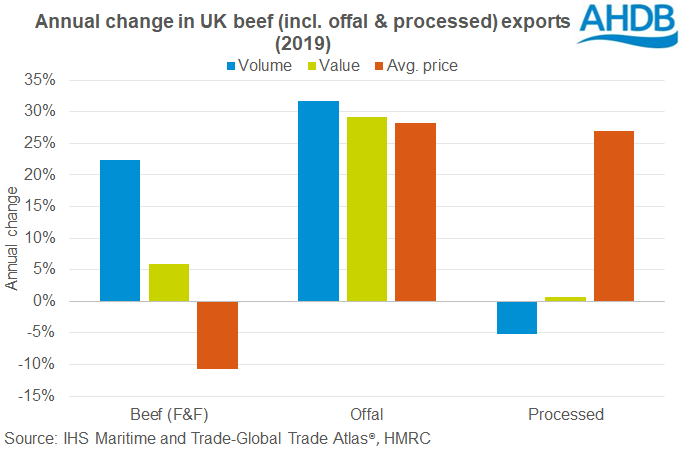 In December, UK imports of fresh and frozen beef totalled 23,300 tonnes, 2% less (-500 tonnes) than in the previous year. While this does continue to mirror the trend seen throughout this year, the change is considerably smaller than seen in recent months. 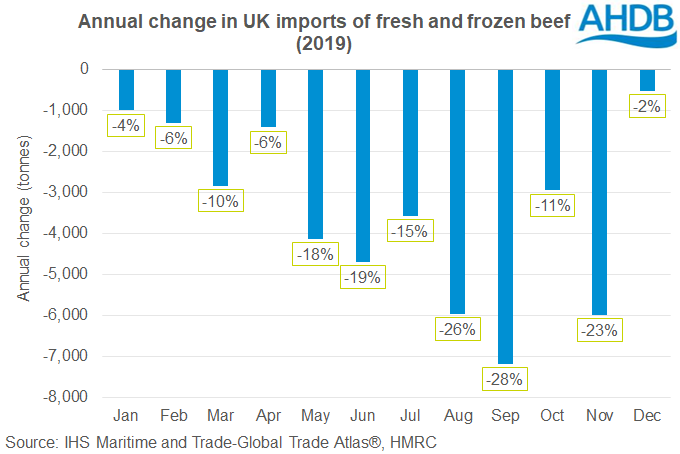 Shipments from Ireland, the UK’s largest supplier of fresh and frozen beef, remained in line with last year at 18,900 tonnes in December. This follows seven months of considerable reductions from nation. Imports also recorded a drop from Germany (-160 tonnes), Italy (-170 tonnes) and the Netherlands (-90 tonnes). Meanwhile, shipments from Poland (80 tonnes) and Belgium (50 tonnes) which compensated somewhat.

As UK beef and veal production increased by 2% in 2019, it is not surprising that UK exports increased while the import requirement reduced. Looking ahead into 2020, our latest market outlook suggests that imports could recover, in light of the expected decline in domestic production. After performing strongly in 2019, export volumes are expected to fall again, also due to a reduction in available supplies.