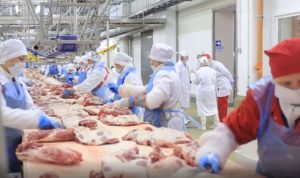 SAO PAULO, March 16 (Reuters) – Brazilian meatpackers JBS and Minerva Foods are considering suspending operations at some slaughterhouses in Brazil due to supply chain issues from China, JBS and sources close to Minerva said on Monday.

JBS said it had been monitoring the coronavirus implications for the market and noted that “it is evaluating the implementation of collective holidays exclusively in some of its bovine processing units in Brazil.”

The company, which also operates in chicken, pork and processed foods, did not detail in its statement which plants might be suspended for operations.

Market sources said the changes were likely to affect other companies in the sector.

“We are discussing several things, but the definition will probably come out tomorrow (Tuesday),” said a source close to Minerva. The company did not respond to a request for comment.

Marfrig Global Foods has not announced any slaughter suspensions, but a source close to the company said it is also following developments.