The first thing to note is that this is a volatile and fast moving situation, and a number of auction markets have closed from today (24 March). 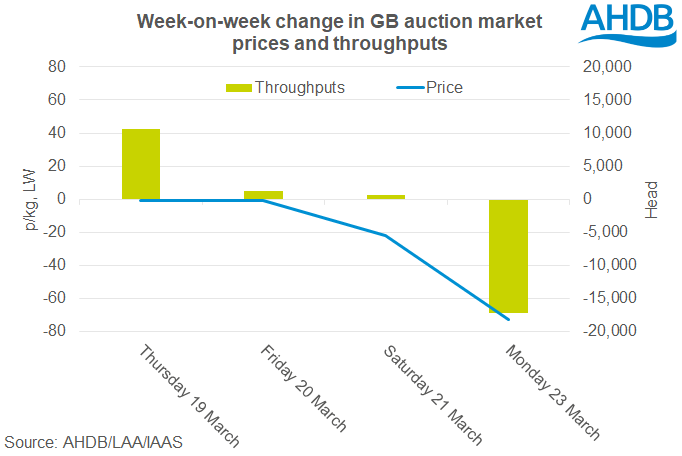 Such a sharp change is almost unprecedented. The average cull ewe price also declined, by almost £37, to £71.70/head. Throughput of lambs also dropped sharply to just shy of 19,000 head. Up until yesterday lamb prices had been holding their ground at around 240p/kg. This was despite throughput increasing sharply in recent weeks. 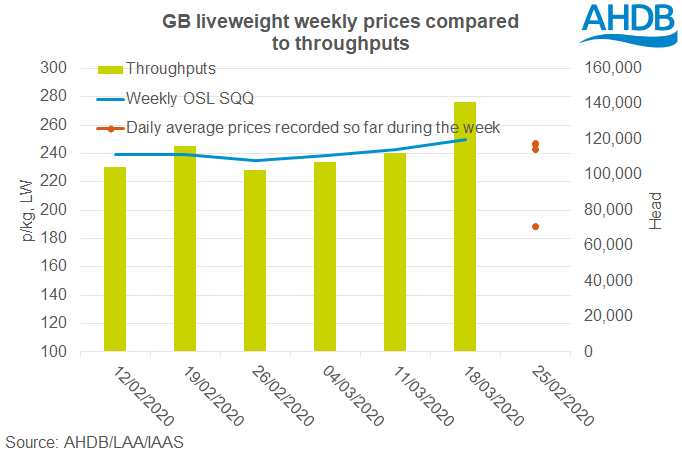 There were some rumours yesterday that France was closing its border to UK exports. This is not the case, and the border between us and France remains open to commercial traffic although there are some extra checks in place. Food products are on the list for priority entry through EU borders and lorry drivers are temporarily allowed to work on Sundays in France to help commercial traffic flow.

However, there have been some additional restrictions announced overnight in France, which further limits the population’s movements. All open-air city markets are now closed, although markets in small rural villages where they are the only place to purchase food in the area can remain open. The closure of the city markets is expected to have a large effect on demand for wholesalers and regional and national wholesale markets.

Lamb demand in France has been described as currently very low. In a similar situation as we have seen here in the UK, shoppers panic bought and stocked up. Many consumers are now eating through those stocks. The further restrictions announced overnight are expected to lead to an increase in shopping again, but this time most likely of poultry and pork rather than more expensive beef and lamb.

Throughout Europe lamb demand at Easter is expected to be low. This could lead to a significant over supply of leg cuts which are a staple product for many at Easter. Retailers in some European countries have cancelled their Easter lamb marketing campaigns.

Looking at domestic demand. Lamb typically performs very well at pubs and independent restaurants, and with those now closed, there is likely to be downwards pressure on UK lamb consumption. Although, some out of home eating is expected to move to within home, different meals and smaller portions are typically eaten at home compared to when eating out.

Prices for prime cattle were largely steady, although cull cow prices did decline 10p week-on-week. Beef demand could be described as a double-edged sword currently. Demand for mince is reported to be strong, which is good. However, this is not good for promoting carcase balance at current prices. With borders remaining open, imports/exports should help to balance this situation.