The EU average pig reference price* has now fallen for three consecutive weeks. The price in the latest week, ended 29 March, was €186.35/100kg, over €9 lower than mid-March. At this level, prices are still nearly €37 higher than the same period in 2019 and similar to January this year. The annual gap has narrowed from about €59 at the start of the year.

Falling prices follow a rush to sell pigs from some producers, reflecting concerns about the potential for disruption to throughput in the coming weeks. Processors have been cautious about the outlook for demand, despite a spike driven by panic buying in supermarkets.

Nonetheless, there are some more positive notes. Pork demand seems to be coping relatively well with the shift from foodservice to retail in Britain at least. The picture may be similar elsewhere; recent German market commentary suggests there is strong demand to replenish retail stores at present. There is also optimism around increasing demand for exports to China in the coming weeks. Although, missing containers remain a challenge at present. 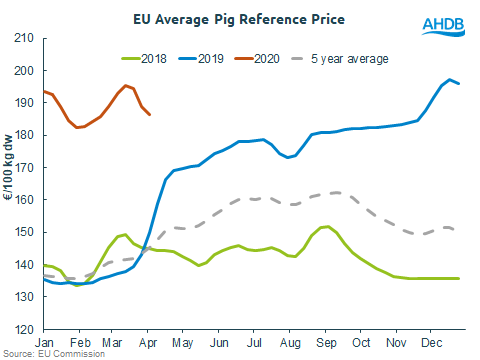 On an individual country basis, there was some variation among the key EU producers. Spanish prices had been rising up to the latest week, when there was a reduction of nearly €4/100kg. Pig prices in France have also been stable so far. Other large pig producers recorded prices falling.

The weakening pound in recent weeks means UK prices have fallen sharply in euro terms, losing €13/100kg in the past month. This has resulted in EU prices rising above the UK again.