Cattle prices have come under pressure in the UK, first for cows, and then more recently prime animals. The situation in Ireland is the same too, although price declines there have been even more marked. Ireland is a large net exporter of beef and so is vulnerable to weaker demand overall, as well as the problems foodservice closure brings to carcase balance. As the UK’s biggest supplier by volume, lower prices in Ireland will, of course, increase the competitiveness of Irish beef on the UK market.

In the week ending 12 April, Irish R3 deadweight steer prices were €3.45/kg, having lost €0.25/kg over the previous month, according to Eurostat. In comparison, at that time UK steer prices had lost only €0.07 over the same period. Irish steers had become €0.34/kg cheaper than those in the UK, having been €0.16 cheaper a month before. 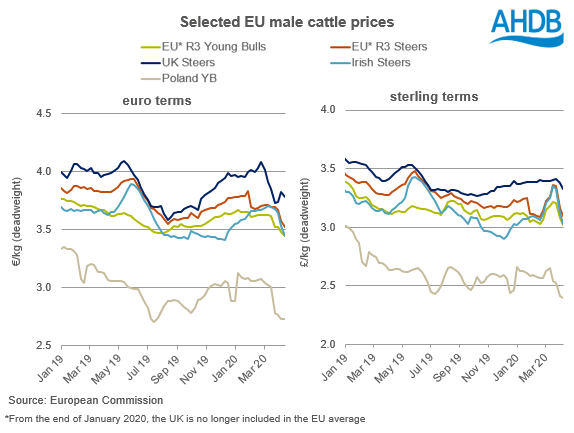 According to Bord Bia, cattle supplies at meat export plants totalled 27,100 head during the week ended 11 April, a decline of 3,600 head on the previous week and a decrease of 8,500 on the equivalent week in 2019. Throughput at Irish export plants has fallen by 30% in the past month. 537,000 cattle have been processed up to the week ending 11 April, 5,000 head fewer than in the same period in 2019. Live calf exports have fallen too, by 8% compared to last year.

Reports suggest that processing sites in Ireland have been able to utilise available government financial support. This has allowed them to stay open, albeit on reduced days, and may further stem beef production, and the demand for cattle, in the short term. Processors in the UK have not been able to apply the Coronavirus Job Retention Scheme in quite the same way.