This week lamb prices have followed the expected seasonal trend. During the week ending 3 June, the GB liveweight NSL SQQ slipped almost 8p week-on-week, to 238.38p/kg. Prices are still currently above year earlier levels. Daily prices throughout the week were all at a similar level to each other. Total throughputs ticked up slightly on the previous week to 101,000 head, with a notable decline in hogget numbers and a rise in lamb numbers. 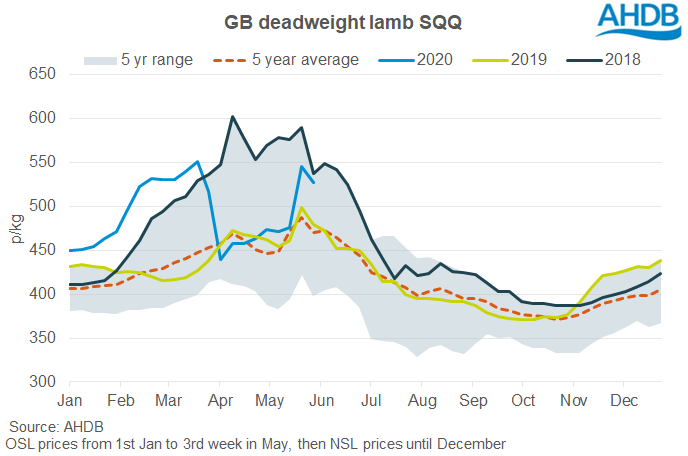 It was a similar story for deadweight prices. In the week ended 30 May, the GB deadweight NSL SQQ dropped almost 19p, to 526.7p/kg. Estimated kill has continued on the same trend as it has for most of 2020 – down on the year. For the week, it stood at an estimated 200,000 head, a similar figure to in the previous week.

AHDB estimates that total domestic lamb demand in recent weeks has largely been steady year-on-year, having suffered in April. Supply of British lambs has been tighter though. Trade would have played a role in balancing these opposing trends during the month. Where prices move from here will depend upon how supply and demand balance against the backdrop of seasonal pressures. Following, the dry hot May reports suggest lambs are finishing quickly. Many farmers now are in need of grass growth, which has been absent in recent weeks.