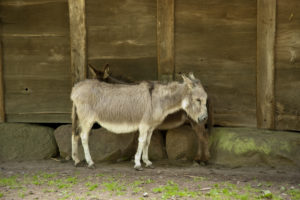 Kenya’s agriculture minister has banned the slaughter of donkeys and ordered the closure of all donkey abattoirs in the country.

Peter Munya gave the owners of the Kenya’s four donkey abattoirs a month to transition to slaughtering other livestock such as cattle and goats. The minister said those who did not comply would have their businesses closed.

Mr Munya’s announcement came late on Monday, after speaking to a group of farmers who had been protesting outside the agricultural ministry’s offices.

Farmers say an increase in demand has led to rampant theft of their donkeys.

In rural Kenya, donkeys are an essential part of life, relied on to fetch firewood and water among other uses, and it is a taboo to eat donkey meat in some communities.

There are fears in Kenya that the country’s donkey population could be wiped out if nothing is done to stop the slaughter rate.

It is estimated that as many as 1,000 donkeys are being slaughtered every day, and that the population could be wiped out in 10 years.

Exports to China have driven the demand as the gelatine produced from boiling donkey skins is the essential ingredient in Chinese “ejiao” products – popular health foods and traditional medicines.