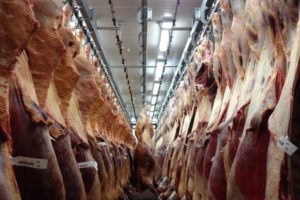 The Agriculture Department published a list on Saturday of hundreds of beef and pork producing and storage facilities that are now eligible to export to China under the new, less-restrictive regulations negotiated in the “phase one” trade agreement.

Chinese import restrictions have been far less damaging to U.S. pork producers, who continue to ship large amounts, but up until now U.S. beef producers have been limited to shipping very small quantities.

Among the hundreds of facilities now listed by FSIS for export to China are plants owned by companies such as Cargill, Tyson, Creekstone Farms and Iowa Premium.

As Agri-Pulse reported, China agreed to lift its zero-tolerance policy for growth hormone residues in beef. China also eliminated its ban on beef from cattle over 30 months old at slaughter and agreed to accept the U.S. traceability system.

“This is an exciting day for the U.S. beef and pork industries, which have waited a long time to have more meaningful and reliable access to China …” U.S. Meat Export Federation President and CEO Dan Halstrom said Saturday. “With much broader access for U.S. beef, the U.S. industry is well-positioned to expand its presence in the largest and fastest growing beef market in the world.”

China has also just agreed to allow for the importation of beef trimmings, adding to the expansion of U.S. access to the Chinese market.