Liveweight lamb prices have been a mixed bag this week. Following sharp declines last week, this week the GB daily prices have been stable to slightly higher. Despite these small rises, prices remain below levels seen before Monday 23 March. Throughout the week throughputs have been subdued. The GB liveweight OSL SQQ fell a further 18.6p, to 202.15p/kg, in the week ending 1 April. Taking the last two weeks together, prices have dropped by 47.9p/kg. Cull ewe prices were equally subdued, down week-on-week by £30, to £60/head. 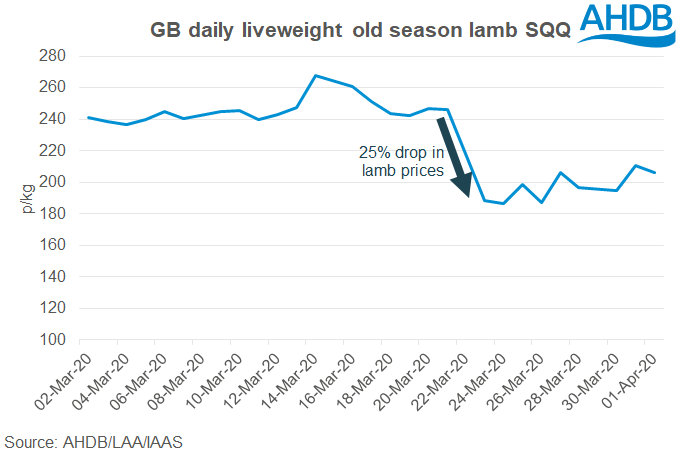 Lamb throughputs were down, even compared to last week’s exceptionally low levels. They were just a fifth of the levels typical at this time of year, just shy of 30,000 head. Cull ewe throughputs were also low at around 4,000 head.

The key drivers are largely the same as last week; much of Europe as well as the UK, will be in ‘lockdown’ over Easter (and potentially the start of Ramadan), reducing demand.

This week the French government announced a policy that French food retailers are to prioritise French products, before looking towards imported products. This could put demand for UK export lambs under even further pressure. However, the French weekly lamb kill is reported to have dropped to almost an eighth of its typical level for the time of year. Under ordinary circumstances one would expect this to support UK export demand, but demand for lamb in France in currently exceptionally low. Reports suggest some consumers either suffering directly from a loss of income, or having concerns over the potential of a reduction in income in the future.

Depending upon how long the UK (and other European countries) remain in lockdown, Ramadan could also be affected. This year, Ramadan starts around two weeks after Easter. Although many think of Ramadan as a fasting festival, Muslims fast during the daylight and then typically would break the fast by having large meals, inviting friends and family over each night. If we are still in lockdown during this period, during which lamb usually does well, then sales of lamb are unlikely to receive the same boost.

Domestically, consumers’ financial concerns mean they are trading down rather than looking to the more expensive proteins. This is the main reason why lamb may not transfer into retail as well as other proteins. Lamb typically over-indexes in pubs and independent restaurants compared with retail sales. However with those outlets closed, lamb potentially lost out to other proteins. When eating at home, consumers do tend to go for slightly different food choices, as well as having smaller portions.

11 April – Easter – The UK and most of Europe will be in lockdown, removing any large family gatherings

23 April to 23 May – Ramadan – Potential for the UK and Europe to be in lockdown, at least for the beginning of Ramadan

20 July to 3 August – Eid al-Adha – A festival where Muslims follow in the footsteps of the Prophet Abraham and have an animal slaughtered as an offering to God. Called the Qurbani, meat is received in three portions – one for the person buying, one for friends and neighbours, and one for charity, helping drive a spike in demand. During this period, the community looks for mature animals, aged six months or older that are fit, healthy and lean.