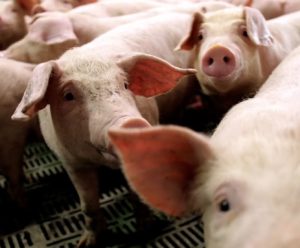 BEIJING (Reuters) – Six planes carrying more than 4,000 high-quality French breeding pigs have arrived in China so far this year, the first of an expected dozens of plane-loads as the world’s top pork producer rebuilds its decimated hog herd.

China is ramping up imports as it rushes to restock after an outbreak of African swine fever swept through the country from late 2018, killing tens of millions of pigs and reducing its sow herd by as much as 60%.

Soaring pork prices and a government drive to rebuild have prompted farmers who had halted buying to resume orders, with some doubling contracts that had been signed prior to the disease. Each charter is worth up to 1.5 million euros ($1.6 million).

“It’s like after World War Two. They lost half the herd and need to repopulate fast to get it back,” said Marie Pushparajalingam, global strategist for French swine genetics company Axiom.

China imports breeding pigs to take advantage of traits like increased productivity and better meat quality that global genetics firms select for during breeding. A top breeding sow can have a litter of as many as 16 piglets.

Axiom sent two 777 charters to China in January, followed by two 747s last month, totalling about 3,400 pigs. It has signed deals for a further six plane-loads later in the year, said Pushparajalingam, and is expecting additional business.

Another 500 boars bred by Dutch firm Topigs Norsvin arrived from France in southwestern Guizhou last week, said China’s Dekang Group, which will use the pigs in a nucleus breeding farm to produce 20 million pigs for slaughter.