In total, sheep meat exports dropped 6,500 tonnes on-the-year, to 134,900 tonnes, according to Statistics New Zealand. The entire decline was driven by a drop in shipments to China (-17,200 tonnes). Exports to other markets partially offset this. Shipments to the UK increased 1,400 tonnes from the historic low of last year, to 16,300 tonnes. Exports to traditionally smaller markets were where the larger volumes were recorded. Malaysia recorded a 4,200 tonne increase, with Saudi Arabia, Taiwan and Jordan all also recording significant rises. Industry reports suggest exports to Europe (including UK) were low during April. 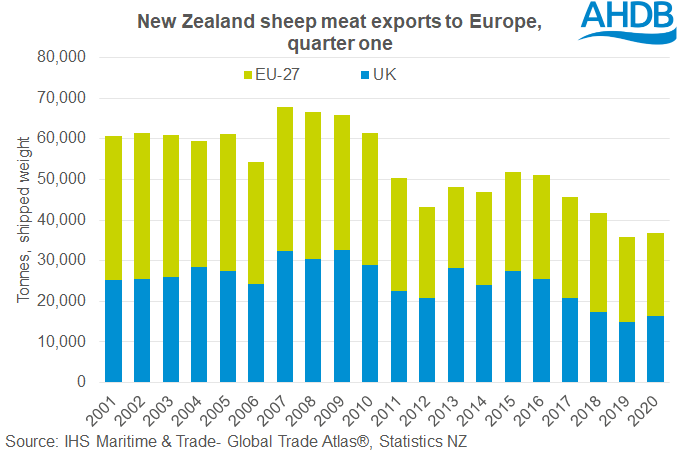 Beef exports increased 5,500 tonnes year-on-year in quarter one, to 129,400 tonnes. Shipments to the US bounced back from the low level of last year (+7,100 tonnes), to total 52,300 tonnes. In a similar trend to sheep meat, exports to China dropped by 11,200 tonnes, to 39,500 tonnes. Japan, Taiwan, South Korea, Canada and Indonesia all recorded growth of between one and two thousand tonnes each.

Production in New Zealand only really became affected by coronavirus in April, which will only then have limited available volumes of export. In line with this, farmgate prices have fallen sharply for both species. Cattle prices have slumped along with cattle prices around the world, although a weaker domestic currency has cushioned some of the impact in New Zealand. Meanwhile, sheep meat prices have dropped, although remain high in historic terms. Both of the trends have the same driving forces; slowing global demand, and supply being ahead of that demand, despite a reduction in processing capacity.