The number of specialists plants* has also reduced, now standing at 11, down 1 from 2020 and 5 fewer than a decade ago. These specialist plants accounted for 77% of the total throughput in England in 2021.

Consolidation in the industry continues with the loss of smaller slaughterhouses. The 11 largest plants (those that slaughter over 100,000 head a year) accounted for 92% of total slaughter, the same proportion as the previous year. The top eight abattoirs (those killing over 500,000 pigs a year) maintained an 83% share of the English kill.

Although consolidation may pose benefits for efficiency, concentrating slaughter presents a risk if one or more of the larger plants have a major breakdown or have to reduce capacity. The last 12 months has been one such example, as staff shortages curtailed throughputs, resulting in pigs backing up on farms. 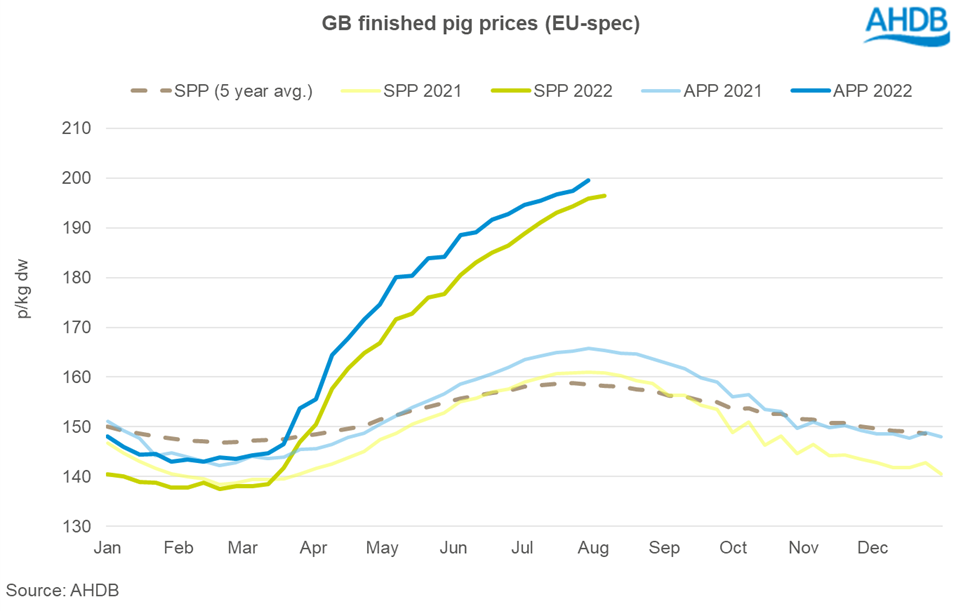 Estimated slaughter for the week was 168,100 head, down 9,500 head on last week. Average carcase weights returned into decline this week, dropping 550g to sit at 87.14kg. This is the lowest weight seen this year and only 880g higher than this time last year, the smallest year on year difference in 2022 so far.

This latest step for Pilgrim’s UK follows the company’s 2021 acquisition of Randall Parker Food’s (RPF) two manufacturing facilities in Llanidloes and Andover, and 350 staff. Via the two plants, Pilgrim’s UK lamb will process Welsh and British premium lamb products, with ambitions of reinventing the lamb category in the UK.

The official launch of Pilgrim’s UK lamb could be seen at the Royal Welsh Show. Here, Pilgrim’s new lamb venture showcased its lamb products, plus the butchery and flavours that go into each product.

Throughout the show, the lamb team – headed by managing director Lee Rampling and Jim Gaffney, the former managing director of Randall Parker Foods – held meetings with industry stakeholders, and members of the NFU and Hybu Cig Cymru, and sponsored various sheep classes.

Mr Rampling said: “A huge amount of work has gone into integrating the RPF sites into the wider Pilgrim’s UK organisation, and it is a testament to the RPF teams’ passion and commitment that has seen the project go so well.”

Turkish President Recep Tayyip Erdoğan announced that the government will initiate a new discount in sales of meat to curb the high prices in the market.

“We will start selling cattle with a 30-35 percent discount. This will also align those who upset the balance of the markets,” Erdoğan said on Aug. 11 at the opening ceremony of 34 hydroelectric power plants built by the State Hydraulic Works.

Erdoğan said the government has added 34 new facilities to the country’s hydroelectric power. “With the cooperation of the public-private sector, our 34 hydroelectric power plants have an annual energy production capacity of 2.3 billion kilowatt-hours,” he said noting that these power plants will provide an annual economic benefit of 2.7 billion Turkish Liras to the country.

“We are proud of having brought 605 new hydroelectric power plants to our country in the last 20 years, together with the ones we will inaugurate today. I have to remind you that this number was only 125 before us. Our total number of dams has reached 930. We no longer experience thirst, even in the driest seasons,” Erdoğan noted.

Beyond Meat has reported that net revenues were down 1.6% year-on-year as the company prepares to cut 4% of its global workforce, according to its latest trading statement.

Founded in 2009, Beyond Meat is a plant-based meat company with products available at approximately 183,000 retail and foodservice outlets in over 90 countries worldwide.

According to the trading report, the company’s net revenues were $147 million, a decrease of 1.6% year-on-year. Gross profit also reported a loss of $6.2 million and net loss was $97.1 million.

Beyond Meat president and CEO Ethan Brown said that the company’s measures for the remainder of the year, he is “confident [Beyond Meat] will emerge from the current economic climate leaner and stronger, and well positioned for [its] next chapter of growth.”

Home / RSPCA calls for a ban on exporting non-stunned meat

UK meat which has been slaughtered without being stunned beforehand should be banned from export.

According to animal welfare charity RSPCA, in recent years the number of animals slaughtered without stunning has been falling – but the proportion of those being exported to other countries has risen.

The RSPCA currently tolerates non-stun slaughter to serve the needs of the UK religious communities that require halal or kosher food, but it has drawn the line at using the practice to serve exports markets.

According to the Food Standards Agency there has been a significant reduction in the number of animals slaughtered without pre-stunning, from a predicted 94 million in 2018 to 25.4 million in 2022, but those destined for foreign shores is rising. Exports of non-stunned meat are now equivalent to 800,000 sheep per year.

Head of Public Affairs at the RSPCA, David Bowles, said: “We are pleased that the number of animals slaughtered without pre-stunning has dropped significantly since figures were last released four years ago.

In Europe, volumes are running at the levels expected for this time of year, according to TVC, as is the cull sow market. Though France remains an outlier, adding 4.16 eurocents to the previous weeks price, for a weekly total of 193.56 eurocents. The average European price rose by 1.20 eurocents on the previous week, ending at 160.53.

Home / Farmers fed up of being ‘easy target’ for emissions cuts

Farming groups have warned the industry has had enough of being seen as an ‘easy target’ for Governments seeking to cut emissions levels.

The comments come after the Irish Government introduced a sectoral emissions ceiling for agriculture of 25 per cent by 2030.

Thomas Binns, NFU uplands spokesperson, told Farmers Guardian while the the farming industry was aware of its climate responsibilities, agriculture was often seen by Government and other industries as an ‘easy target’.

He said: “Farming is a very a visible industry regarding the links between ruminants and emissions. And even though some of the information regarding this is now being questioned, the stigma remains. But farmers are now beginning to push back, as we can see in the Netherlands and Italy, and they are right to do so.”

The annual week-long celebration of UK lamb will be returning next month for an eighth year, with sheep producers set to shine a light on the sustainability of their sector.

Love Lamb Week, running from 1-7 September, aims to remind consumers of the taste and quality that UK lamb brings to the dinner table.

The popular initiative will focus on how lamb is ‘naturally delicious’ and due to the country’s climate and landscape, with plenty of rainfall and grass, the UK is an ideal place to produce lamb sustainably.

As in previous years, the industry-wide initiative is supported by groups such as AHDB, Hybu Cig Cymru (Meat Promotion Wales), Quality Meat Scotland and LMC in Northern Ireland, among others.

AHDB Head of Marketing, Carrie McDermid said: “We are delighted to be supporting Love Lamb Week for an eighth year.

“It provides us all with the opportunity to celebrate UK lamb, a family favourite due to its superior taste and quality and shine a light on our world-class food and farming standards.

Dutch farmers are continuing to protest over the government’s plans to cut emissions, which will see more than half of livestock farmers having to give up or drastically slim down their businesses.

Recently, farmers in the Netherlands have blockaded food distribution centres and major roads with hundreds of tractors, as well as having gathered outside regional assemblies and ministers’ homes, in protest of governmental plans to cut ammonia, nitrogen oxides and nitrous oxide emissions.

The wider Dutch community is also showing its support for the faming sector, by hanging the Dutch flag upside down along roads, bridges and buildings within the Netherlands. While the Polish government and Donald Trump have also stood in support of Dutch farmers.

The latest protests come as authorities announced a radical plan to reduce intensive farming, with a 30 to 50% reduction in livestock numbers across the Netherlands, in a bid to meet environmental targets by 2030.

Rudi Buis, a spokesman for the Dutch agriculture ministry, said to the BBC: “It’s necessary to improve the nature, for our health, for clean air, water, soil and also for the agriculture because we need biodiversity…if we want some economic activity in the future, we also have to improve our nature.”