The past week has been firmly spilt in two for the GB lamb market. During the few days running up to the weekend, liveweight prices were steady or only marginally down. After the weekend however prices were dramatically lower. The weekly GB liveweight OSL SQQ fell almost 30p in the week ended 25 March, to 220.76p/kg. 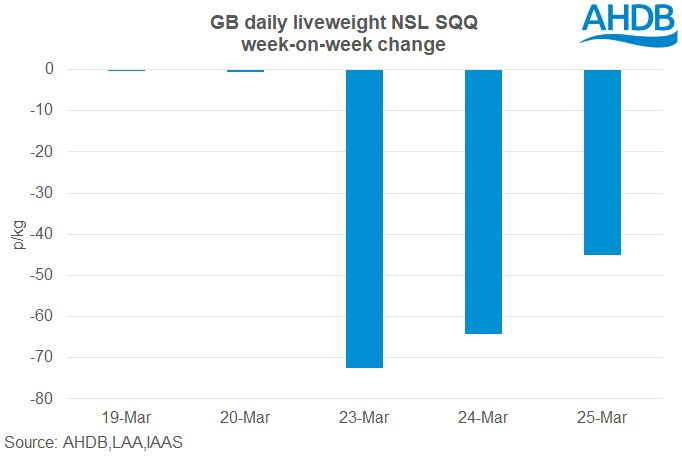 There are a variety of forces currently at play in the market, most recently:

Full details of the pressures and supports currently on GB lamb prices can be found here.

Throughputs for the week were significantly lower, almost halving, to 72,000 head. Much of this decline came later in the week, caused by fewer markets open, concerns from farmers that there wouldn’t be buyers at the markets, as well as some farmers choosing not to sell at current prices. The drier weather may have arrived at just the right time. Fields are drying fairly quickly now, so keeping animals on farm is becoming a more viable option.

The latest deadweight prices cover the week ending 21 March. The GB deadweight OSL SQQ rose 12p week-on-week, to 551.4p/kg. Since then the market has shifted significantly. Estimated kill for this week stood at 221,300 head, 3,500 more than last week.