Across the board GB deadweight cattle prices have continued on an upwards trend. During the week ending 30 May, the all-prime average measure increased 7.5p week-on-week, to £3.45/kg. For the first time in quite a while prices are within touching distance of the five year average. Estimated kill for the week totalled 31,300 head, down 1,700 head week-on-week. It is likely some of these cattle were brought forward due to concerns over the dry hot weather. The rain this week is likely to be a relief to many.

Average prime price movements for the week ending 30 May:

Throughout May prices have been supported with demand being steady but supply tightening. Total demand (retail and eating out) had suffered during April, but in May volumes were similar to May 2019. The supply of prime cattle has largely been lower, and is expected to remain tighter. 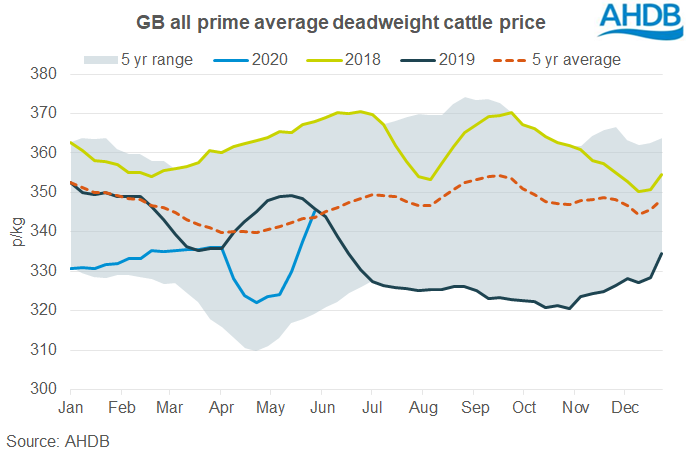 Prime cattle were not alone in recording price rises. The GB overall cow price rose 6p on-the-week, to £2.47/kg. Demand for cows may have been supported by the reopening of some fast food outlets for take-away and drive through orders. Estimated cow kill increased 500 head during the week to total 10,100 head.